How to Design a Weekly Planner Printable in Indesign 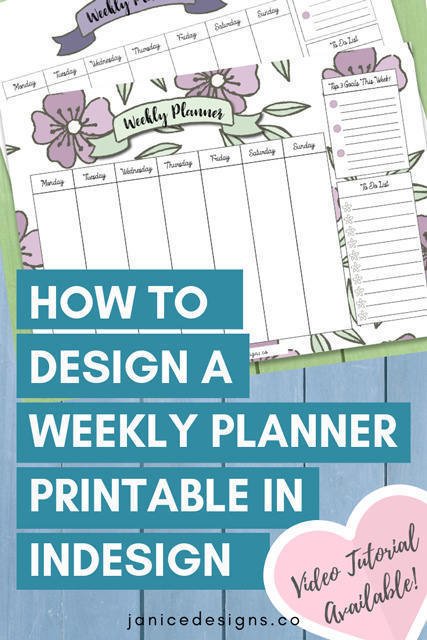 Disclaimer: Some links from this website may contain affiliate links, which means I will earn a small percentage of commission if you choose to make a purchase at no extra cost to you. However, I will only recommend and endorse products which I use so I know they will be beneficial to you as well.

I am so excited to have started off the New Year with my first tutorial! Phew, I haven’t done any tutorials for my YouTube channel since August 2017 – that’s like a year and half ago – YIKES! Although Michelle Rohr-Pelayo had given me a challenge late last 2017 to do a tutorial on “How to Use Video to Showcase Your Printables” (Psst… it’s in the BONUS section of her Passive Income with Printables Course by the way) … But I was only able to complete it after more than 6 months due to family commitments and other circumstances! Another – YIKES! So, when I was able to complete that MASSIVE tutorial – it was such a huge achievement for me. Not because I did the tutorials perfectly (Gosh, I think there were SO many areas in my videos I could improve on), but because I have completed what I have set out to do.

“Done is better than perfect.”

I don’t claim to be an expert at anything either. I am only sharing what works for me. I sometimes think that I SUCK at teaching..because there are just SOOO many better “teachers” out there on YouTube. However, I have just SO much knowledge to share and I strongly feel that God is nudging me towards this direction. It feels right and it feels great. And so, here I am, obeying His will. Even though I cringed at the thought of my weird Malaysian-Kiwi accent; hoping that I will not put people off from listening to me. Ugh. Hopefully in time, I will get better at teaching. I just need to practice more and stop worrying about what other people think of me.

How to Design a Simple Weekly Planner in Indesign and how to incorporate beautiful clip arts to beautify and uplevel your design. People dig that stuff. You know the cute clip arts and all. And if you put anything with flowers in them.. they just go CRAZY… I’m totally serious. So use clip arts in your printables whenever you have a chance! They help give your printable planners a face lift and help you stand out from your competition.

By the way, I made a slight mistake on one of my shortcuts in the video. The part where the pattern image needed to be “Send to Back”.

And that is why I thought of creating a quick Indesign Cheat Sheet. Do you know that   the latest InDesign version (CC 2017) contains   407 shortcuts in total ? This is almost impossible to remember and that is why I’ve created a  ONE-PAGE Indesign Cheat Sheet that I usually use while working on my printable in Indesign. They are the basics shortcuts and are all you need to start with.

I hope it will be helpful to you!

You can also now download the Weekly Planner Printables (from my tutorial) when you become a club member of the Inspired Printables Club! 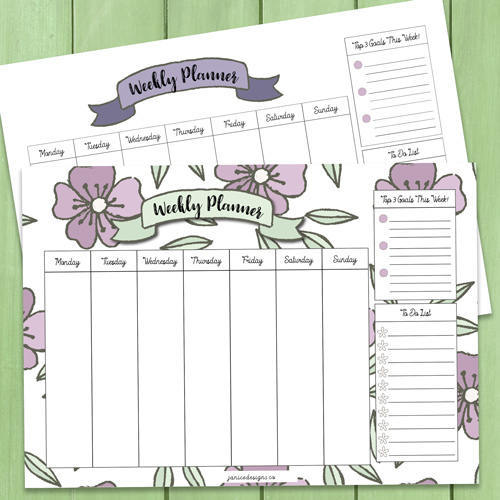 You get more value of my printables when you become a member of the Inspired Printables Club Today! If you want more printables like this, join the club! 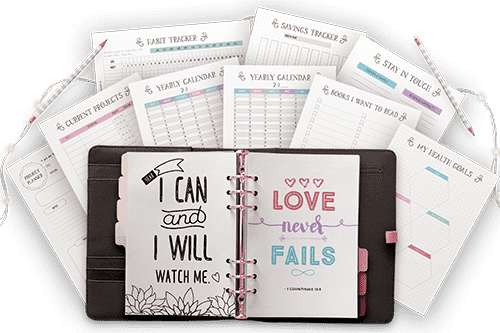 Plus, get 20% Off Your First Order (inc discounted items)

These 11 Free Printables from our most popular bundle can help you stay organised. Keep focused. Achieve anything you want!

You have successfully signed up! Please confirm subscription to ACCESS your Free Printables & Coupon Code.